The Night Circus by Erin Morgenstern: My Review

You may tell a tale that takes up residence in someone's soul, becomes their blood and self and purpose. That tale will move them and drive them and who knows what they might do because of it, because of your worlds. That is your role, your gift. 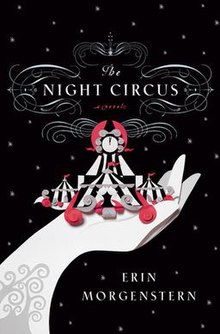 The Night Circus is now officially one of my favourite books of all time. I adored every single thing about it. I adored the incredible intricate way it was written, how magic is interwoven into every sentence and passage. The prose sparkles throughout and the story itself was undeniably a feat of astonishing magical acrobatics.

The main plot was genius - two ancient magicians set their two best students against one another in a mysterious magical competition, but the students don't really know the rules or how their victory will be determined. Everything about the concept I found to be so unique and intriguing, with new revelations and pieces of information occurring just at the right time at excellent pace.

However, my very favourite aspect of The Night Circus was the characters and how Morgenstern made them seem so very real and relatable despite their removal from normality due to their magical abilities. The romance between Celia and Marco could not have been more stunning and utterly heartbreaking; I loved their relationship with all of my heart. That being said, though, the love scenario is quite set back in the overall story and serves to compliment it rather than being very central to it which was perfect for me. I also absolutely loved the Murray twins and Bailey who are the youngest characters in the story but at the same time showed so much intellect and formed such a special friendship which changes Bailey's life completely.

Of course, I cannot forget to mention how I completely and utterly fell in love with Erin Morgenstern's writing. Her way with words is consistently so lyrical and whimsical and brought the story to life in such a vivid way that was like no other novel I've ever read. If you are a reader who looks for a fast-paced plot packed with action and combat and doesn't care too much for lush descriptions, then this book certainly won't be for you. I happen to be a reader who thoroughly appreciates rich imagery and evocations of setting and character, so I couldn't get enough of this book. The way the various circus tents, acts of magic and performers were conveyed was unflinchingly indulgent, and only made the narrative more engaging rather than distant. As I was reading I could literally see the monochrome tents, the glare of city streetlights, the glossy outfits, the dreamlike clock; I could smell the decadent food at Chandresh's dinner parties, the toffee popcorn and bonfire smoke of the circus; I could feel the shivering cold of The Ice Garden, the warmth of the summer nights when Bailey escapes to be with his magical friends. Everything seemed so real, and I wished unconditionally that it was.

Overall, this review in no way does any justice to how much I love this book as I can't really speak coherently about it. I quite honestly have never had the privilege of reading a more beautiful tale than The Night Circus. It had me wrapped up from beginning to end and is one that will stay in my heart forever.