Showing posts from January, 2019
Show All

books i read in december ❆ 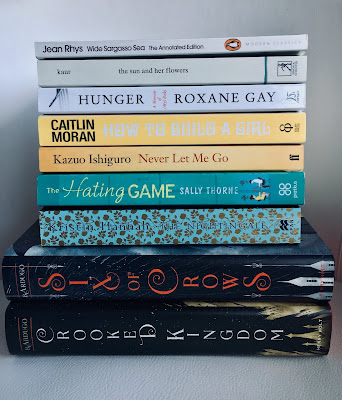 Here are all the books I read in the last month of 2018! Some quite mixed ratings but I'm really excited to have found some new all-time favourites ✨  ❇ No. of books read: 10 ❇ Pages read: ❇ Genres: 2 classics, 1 memoir, 1 romance, 2 fantasy, 1 dystopian, 1 contemporary, 1 historical fiction, 1 poetry collection Wide Sargasso Sea by Jean Rhys ★★ ★ This was just pretty mediocre for me. Rhys essentially tells what she imagines to be the backstory of Bertha Mason - otherwise known as ‘the mad woman in the attic’ - from Jane Eyre; her childhood, how she met Rochester, their relationship, but most importantly why she went mad. I definitely appreciated the idea behind Wide Sargasso Sea; Charlotte Bronte doesn’t give Bertha any history in her book, using her more as a sort of plot device, and so I enjoyed reading about her decline into madness as it allowed me as a reader to appreciate who she really was and why she ended up the way she did
Post a Comment
Read more

what war poetry means to me 🥀

A Quick Tribute to War Poetry, & Why I Love Sassoon and Owen ✨ I’m not generally a huge lover of poetry, but war poems have always felt very special to me. The emergence of war poetry, in my mind, somewhat marks a turning point for the art form; there’s a sort of discordance felt as the conventional, traditions of Victorian and Romantic poetry, that had before depicted more ‘gentle’ scenes, are being used again but in a completely different way, a manner that allows the poet to articulate the absolute horror of industrial violence. My two favourites are Wilfred Owen and Siegfried Sassoon, both of whom are poets that often get referred to as pacifists, but I don't think that's true - the fact remains that both personally fought in the First World War, were exposed first-hand to the brutality of warfare, and believed conflict was being unnecessarily prolonged, which I think is an important distinction to make. In 1917, a number of war poets were writing their work at a
Post a Comment
Read more
More posts